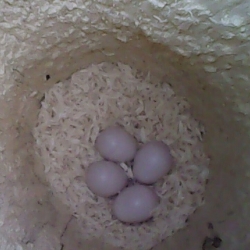 Volunteers for the Devon Pied Flycatcher network have found a new Lesser Spotted Woodpecker nest with four eggs and as of 29th May four chicks.

There were four eggs when the nest was checked on 17th May and four chicks when it was checked again on 29th.

This nesting is late in the season, when compared with the Lesser

Spot nest in East Anglia, where the eggs hatched on 8 May. The chicks typically leave the nest about 23 days after hatching.

This is only the second nest reported to LesserSpot Network this year. We are hoping for more.

The photo taken by David Prior, shows Malcolm manouvering the nest camera, mounted on an extendable pole, into the nest hole. A wireless link transmits the picture down to a mobile phone or tablet.