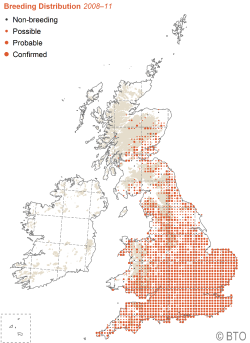 Green Woodpeckers (Picus viridis) are the largest of our three woodpeckers and are resident and common in England, Wales and parts of Scotland. They are not present in Ireland.

We will use these pages to report some current and past observations and studies of these fascinating birds.

Green Woodpeckers are gorgeous with their vivid green and yellow plumage, a striking red crown and black face mask. At 31-35cm (12.0-13.8 ins) long from bill tip to tail tip and weighing around 190g (6.7oz) they are about the size of a Jackdaw. They are often seen feeding on grassy areas.

Young Green Woodpeckers look different, they are heavily scaled and spotted black and white without the black face, see photos on left.
In 2016 the British Trust for Ornithology (BTO) estimated there were 46,000 pairs in Britain (with a range of 41,000-51,000).

The map shows the breeding distribution from the latest BTO Atlas (2008-11). Comparison with previous atlases showed a decrease in numbers in southwest England and Wales and increases in the east – more than doubling in 16 years.

Green Woodpeckers are basically sedentary and do not move far from year to year. Information from the BTO ringing scheme shows that the median recovery-distance for adults is 1km and for juveniles is 3km. The longest movement recorded by BTO ringing is 71km, during the harsh winter weather of early 1963.

Green Woodpeckers nest in cavities in trees which they excavate themselves. They have one brood per year with a clutch of 4-6 eggs each weighing about 9g. The incubation period is 19-20 days with fledging after 21-24 days. They are long lived the record being 15 years.

About 300 birds are ringed each year.

In 2020 two Woodpecker Network volunteers took the initiative to record nesting woodpeckers in their local area in Norfolk, whilst compying with COVID-19 restrictions. Ricky tells the story ... 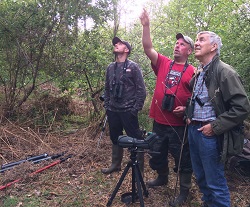 Ricky and Mat with Ken in discussion about woodpecker nest in 2019By the time Spring 2020 finally arrives local birder, Matthew Shore, and I would have usually been heading off to some suitable habitat to go listen out for the sound of drumming Lesser Spotted Woodpeckers. But as March was in full swing, we were all hit by the coronavirus crisis and were forced into a national lockdown which went into April and May. This meant we were unable to go looking for Lesser Spots, so Mat and I agreed to turn our efforts to finding local woodpecker nests.

The Lesser Spotted Woodpecker is a rare breeding bird in Norfolk and with us living in the Norwich area we were sure we wouldn’t be hearing any calls or drumming from them. But of course the Great Spotted and Green Woodpeckers would definitely be a good target and only a walk or bike ride away.

So after discussions with Ken and Linda Smith from the LesserSpotNetwork Science Project, who have many years of experience between them as regards all things Woodpeckers, we agreed to try find as many nests local to us of those two species.

Mat and I both had experience of observing the species from the previous years, so we set to work on trying to locate suitable habitat for both species around where we lived or worked.

I was now back to work, as the month of May approached and as my job takes me around the city’s outskirts, I began to listen out for any ‘yaffling’ of a Green Woodpecker as I worked. 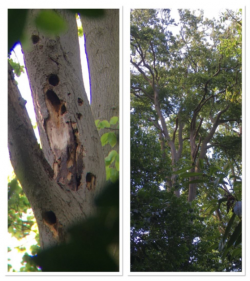 The 'Master' Beech tree, well used by Green Woodpeckers over the yearsWhile working at a school south of Norwich I was pleased to hear on two mornings a Green yaffling from the edge of a suitable woodland area. The school playing field which sat between the wood and school was a suitable food source so I decided to use my lunch break to investigate. After two visits to the wood and hearing a pair call to one another I found what we call a “Master Tree”, a tree which has a number of woodpecker holes in it. Some just a start of a hole (pilot) or some excavated fully or some in the process of being done. These holes on a species of Beech were all clearly Green Woodpeckers from the size of the hole and so I decided to return the next day at lunch and stake it out.

Well, I’m glad I did as I witnessed a bird arrive and begin to go inside fully and start to remove small amount of wood chips, this was a potential nest hole for sure! Checking the base of the tree itself revealed a massive amount of wood chips scattered around the ground, showing me just how much of a cavity the bird had already excavated inside the hole! I think I had just caught the nest a few days before egg laying and the next time i visited, I witnessed a change over at the nest, confirming they were incubating - magic!

Meanwhile Mat had also been busy by searching some nearby habitat to where he lived and he also had found a Green Woodpecker nest in an Ash tree. This one was interesting as it was a hole inside a natural cavity and nice looking hole to observe.

Over the coming weeks we spent many hours walking /searching woods and areas of suitable trees, with good feeding habitat nearby and found a total of nine nests, all of which we would go on to observe! 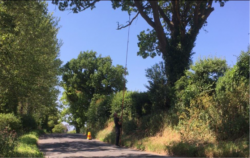 The picture shows me using the nest inspection camera & pole set up, that was used to collect the data from the nests.In late May the Covid restrictions were eased. We used a nest inspection camera, borrowed from Ken and Linda Smith, to look inside the nest cavity and see the number of eggs or young and monitor their progress.

We always set out to make observations for one hour at each visit to a nest and record the following data throughout the months of observations: 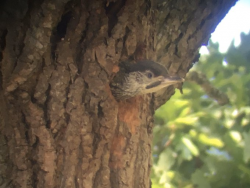 Green Woodpecker chick looking out•Location
•Date nest was found
•What stage the nest was at
•Height of Hole
•Direction the hole was facing
•Tree Species
•Number of young hatched
•Number of young fledged
•The fledge date
•Total number of visits/observations. 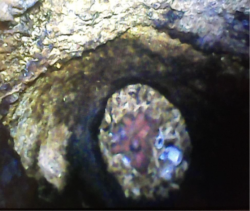 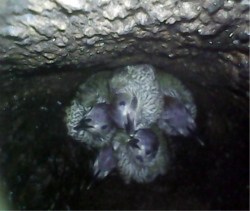 Five Green Woodpecker chicks in nest GM7 on 13 June 2020, they fledged 3 days laterAlso these pictures were a great help for us as regards working out how old other young are in the nests when using the inspection camera.

Using the Breeding Nest info from BTO* we know they incubate the eggs for around 19 -20 days, putting the egg laying date around the 12th April. Then the fledge date being between 21-24 days.
The following breeding dates therefore are-

Therefore the young fledged at 25 days old. We used this information to estimate the egg laying date for all our nests.

We monitored nine nests. One (AT3) failed at the egg stage. Young fledged successfully from eight nests (89% success), at least 35 young fledged, an average of 4.4 chicks per successful nest.
The information gathered is shown in the table.

Our nine nest records in 2020 are more than the five reported nationally in 2016 !

Other Observations
A number of other potential nests were also found either by me or Mat. We observed young feeding/ calling or saw adults in trees with suitable holes at eight other sites. So our conclusion is that Green Woodpeckers are thriving in our part of Norfolk. 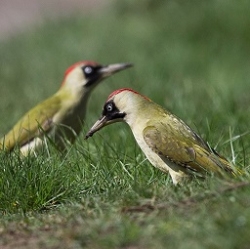 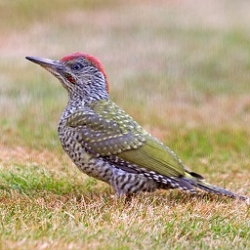 Green Woodpecker feeding a chick at its nest in Norfolk. Photo Ricky Cleverley

Acknowledgements: thanks to BTO for permission to reproduce the distribution maps and other data from Robinson, R.A. (2005) BirdFacts: profiles of birds occurring in Britain & Ireland. BTO, Thetford (http://www.bto.org/birdfacts, accessed on 14 January 2021) 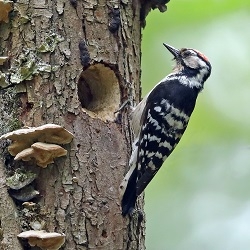 Here are some tips for finding and monitoring woodpecker nests, especially Lesser Spots based on the experiences of our volunteers.
Go to an area where you saw or heard LSW earlier in the year. Spend time in the area and: 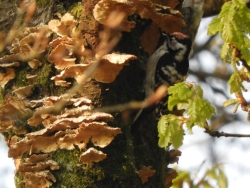 Thanks to all LesserSpotNet volunteers who have been searching for LSW breeding territories and nests as part of our project.
We are now (late April) coming to the end of the peak period of detectability when birds can be found by their calls and drumming. Even during this period, the birds are by no means easy. As our volunteers will know well.
The good news – observers in Devon, the New Forest, Norfolk and Sussex have found Lesser Spots excavating nesting cavities and some look ready for the female to lay eggs.