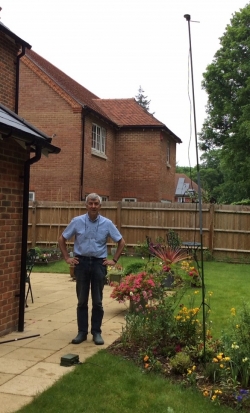 co-ordinated by Ken and Linda Smith. Our bat recording project started in 2018 with the puchase of an automatic bat detector and in the last four years we have had fantastic results, we have recored bats from every location surveyed. Some highlights are summarised below.

We are looking for more volunteers to host the bat detector in their garden or other suitable location, for a couple of nights. If you are interested in having the detector in your garden (within a radius of 10 miles from Chichester) please get in touch. 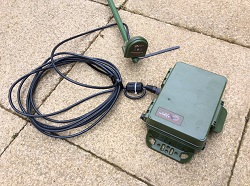 You would nornmally collect the kit from us, we live in Chichester/Lavant, (but we can bring it to you by arrangement).

The automatic detector has a microphone sensitive to the range of frequencies of calls made by bats when flying and feeding. The recorder is active all night, every time it is triggered by a bat call it records for 5 seconds. All recordings are stored on a little memory card and we have some clever software to analyse the data and match the calls with the different species of bats. Because the detector is vigilant all night, it gives much more comprehensive results than a hand held device. 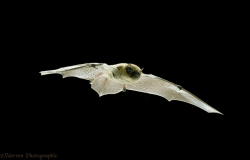 A Serotine Bat gliding, Warren Photographic The equipment is very simple to operate, all you do is put it out in your garden for 1 or 2 nights. It comprises a microphone sensitive to bat ultrasound, which is mounted on a 12ft plastic pole and connected to the detector box on the ground. As the bats fly over their sounds are recorded and stored on a memory card. The detector station is left out unattended overnight for one or two nights. When you return the equipment Ken and Linda will extract the data and transfer it to the BTO Acoustic Pipeline for analysis by specialist software to reveal which bat species were detected flying over or feeding in your garden.

More details in the Bat monitor set up instructions

We plan to place the bat detector overnight at as many suitable locations as possible in Chichester and surrounding area (within an approx 10 km radius of Chichester). This will give an insight into the species present in the area and their distribution. 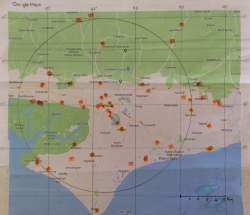 Update - August 2021. The bat recording project has been running since April 2018 and has achieved amazing results.
So far, the bat detector has been placed in over 80 different locations in Chichester and the surrounding area (within an approximate ten-mile radius of the city) mostly in ChiNats members’ gardens from Nutbourne to Chilgrove to Slindon to Selsey and Bognor as shown on the map.

It has successfully recorded for over 800 nights collecting over 100,000 bat records involving at least 12 different bat species. Records of the less common species are reviewed by bat experts, but we are confident that bats are found everywhere.
• Both Common and Soprano Pipistrelles have been recorded at all the gardens, some in very large numbers which were probably close to a roost.
Of the other bat species:
• Brown Long-eared, Serotine, and Noctule bats were detected in over 70% of gardens.
• Nathusius’ Pipistrelles, which migrate here from southern Europe at 55% of gardens.
• Barbastelles, which are thought to be scarce and wander widely at night, were recorded in 43% of gardens, but in very low numbers.
• Myotis species, mainly Daubenton's but also Natterer's, Bandt's and Whiskered, have also been recorded in some places.

The detector is available to borrow until the end of October when the nights turn colder and the number of bats flying decreases. We deploy the detector in our garden in Lavant/Chichester on any nights when it is not out on loan and on suitable nights through the winter to monitor any activity.

If you would like to host the bat detector for a night or two in your garden or elsewhere please get in touch with the project co-ordinators, Ken and Linda Smith, contact details This email address is being protected from spambots. You need JavaScript enabled to view it. or telephone 01243 786079.